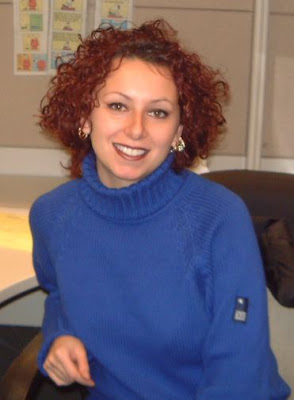 Nicole Marie DeYoung
In Will County, Illinois, in the town of Steger, a woman and her boyfriend, while sleeping
were murdered. A young boy also in the duplex was hiding and he was not harmed.
This case is disturbing.....
On April 5, 2003, there was no sign of forced entry, someone let themselves in with their own key.
In an interview a year later, according to the Police Chief " While police admit that they get no more than two homicides a year and that there is a high turnover rate among their detectives, Steger's police chief insists the department has worked hard on this case."
"We followed up on every lead that has come into this police department. We've chased down leads," Chief Richard Stulz told NBC5. "I believe we've done everything we could up to this point."

Steger is a small police department and at the time of the murders they were distracted, using resources to prosecute another case -- against their own, Sgt. Scott Osantowski, who was later cleared.

Had Steger police properly investigated this case they would know that the only person who had a key to the residence was Nicole's former boyfriend. He was angry over the couples break-up. And livid when Nichole began a new relationship.

According to witnesses prior to her death, he swore he would kill her.

This is a case that could have easily been solved. But justice was interrupted because of police negligence.

In Will County, there are other numerous cases where justice continue's to be interrupted.

I realize law enforcement and the state's attorney's office are overwhelmed with domestic violence, stalking, unsolved homicides and other family violence related crimes.
But, the crime is when you are paid to do a job and fail. Placing a band-aid over a boo-boo does not stop the bleeding. Steger Police failed the family. Proper investigation and prosecution of this and other cases is what is lacking in Will County.

This is a cold case, but the trail is still, very warm.

Perhaps the Illinois State Police will step in to re-open the case. Before this man murders someone else's "Mommy" or Daddy.
at 12:38

I am not happy with Will County states attorneys office they lack the ability to do their jobs in lots of stalking and domestic violence cases. Prosecutors are in need of a crash course in doing their jobs!

I remember this case, tragic they never arrested anyone in the murders. The police botched the crime scene. It never went anywhere.

Nicole was one of my best friends when we were little. I moved away and eventually lost touch with her. I pray daily that someone will be caught and brought to justice for this horrendous crime.

Steger is in Cook county...

Steger has one of the most crooked police departments. Scott the police officer, is one of the worst. We can only hope that their is justice for Nicole and her boyfriend.

common sense the police and the streets know who did this everyone one say there is 1 person well i knew Jr. better than most 2 thing his gun was not there only #people knows where and when he had it # 2 person had the key Jr. son was not touch cause he was raised by the man that killed Nicole & Jr. the law knows so do the the streets in due time the truth will surface it kills me everyday i dont had my bestfriend my brother i love and miss both of them what kills me the most is they had one of then in cust and let him walk

To the last comment- if you get a hold of me at Murphymilano@gmail.com
with a number of where to reach you I might be able to doing something.

We all know who did this. He's the same person that recently set up a false crime that supposbly happened in beecher, where his sister was involved, after her robbed the so called offender in October. He needs to be stopped, put in jail, or killed the same way he killed Nicole, times 15. He's a piece of worthless s*hit/ waste of the earths air.

Privately, email me at murphymilano@gmail.com with whom you are taking about with a bit more detail and I will see what can be done. Thank you for taking the time to comment on these unsolved murders