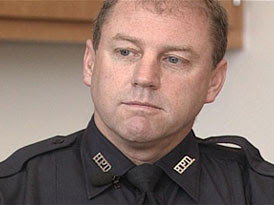 Ken DeKleine at trial with his Lawyer 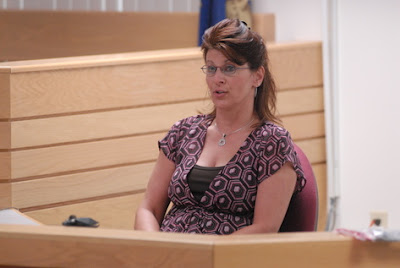 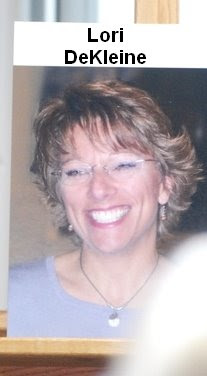 "Think about the children" were the final words from Lori DeKleine's lips just before her estranged police officer husband, Ken DeKleine, murdered her on January 10, 2008.

The trial began on Tuesday in Grand Haven Michigan. The Prosecution ended their case today.
The defense presented no case, their client had confessed on video to Lori's Murder.

The tin badge coward of the law, well regarded by his fellow Holland Police Officers, staged the crime scene, in the basement of the home they once shared to make it appear Lori, had committed suicide.

This coward of a man, left the body in the basement for the couple's teenage son to discover. The young man will never recover from the smell of death and images of seeing his life less mothers body and the nylon strap tied around her neck. He will be haunted and reminded for the remainder of his life.

Like most abusers, Ken Dekleine was obsessed that his wife was romantically involved with another man. In this situation, her therapist. He was angry when she secured an order of protection against her police officer husband in January of 2007. Placing blame on the therapist for interferring and brain washing his wife.

It would be Ken DeKleine would would take a mistress sixteen months prior to the murder.

Richelle VanderWal was also married to a police officer at the time, and in the midst of a divorce when she met DeKleine.

This is not just another tragedy, of a controlling abusive police officer gone bad. Likely to receive
a life sentence.

It is the tip of the iceberg. A glimpse if you will, into reality of what law enforcement wives married to these cowardly tin badge abusers endure, daily.

Police Chief's and the National Fraternal Order of Police need to wake up to the reality their union paying members are committing crimes within their own famiies.

Support the officer and include the family. Yes, the family. You know the wife who has to be careful when her officer husband returns home after shift, because he is drunk. Angry over pressures on the job. Maybe he found a child sexually violated, murdered and left in a swallow grave. Perhaps he was called on a crime scene where an elderly couple was robbed and then murdered. How is a police officer suppose to cope and survive? Where is a police officers wife suppose to turn when the officer turns the gun on her? Where is she suppose to go when her life is in danger?

Provide programs for officers who see the worst of human tragedy, daily. Work with Prosecutors around the country, implementing healthy and safe program for the wives and children.

In ignoring this national epidemic within the law enforcement community, the "Blue Brotherhood" are just as guilty.

I know folks hope he rots in a 3 x 4 cell, I hope not. Hate is not the answer, forgive and release.

Some people like Lori's family are elated with todays verdict. many circumstances follwed Ken DeKleine's downfall. Nmley Roe the therapist treating Lori & having an affair with her.

Nobody wins, nobody. Kids with both parents, lives shattered.

It's not over, or shouldn't be.
The trial itself was full of testimony of people who knew things that should have been reported or acted upon, not charging KD on his violations of the protection orders, things the chief said after the murder regarding KD's personal life not being his business, a friend in the news who said Lori knew the police wouldn't protect her... it goes on and on.
From private emails I've recieved I've learned others who also turned their backs.
I'm studying it all together and plan on making some noise.
WHO KNEW WHAT WHEN AND WHAT DID THEY DO OR NOT DO ABOUT IT?
That's the question if Lori's death is going to contribute to making things better for others like Lori.
It's about accountability, not blame.
Nothing like a lawsuit to get things in the open:

LANE JUDSON MADE HIS DAUGHTER A PROMISE
http://www.lanejudson.com

Yea clouder what do you know looked over your site. You hate cops. Blow it out where the sun don't shine.

With the guilty verdict came a blank stare on DeKleine's face, and simple nods of accomplishment from Lori's family.

"Please continue to pray for our families as we work our way through this deliberate act of taking the life of a mother, daughter, sister, aunt, niece and cousin," pleaded Lori's mother Jena Meulman.

And in the end, any sense of hatred seemed to melt, as Ken DeKleine's brother, Keith, embraced Lori's mother.

Ken was a fine officer. Maybe the department and town can finally move on.

I am really amazed by some who commented here! Forgive and release? Move on?

I think it is these very attitudes that perpetuate this type of violence. Nobody looks behind the curtain because it is too ugly.

Lori DeKleine! This woman's life was taken by her upstanding policeman husband! Not only did he vow to honor and cherish her, but he also took an oath to protect and serve. Then he murders her and stages the scene so her son can find the body! How can you move on from those facts?

It is not a matter of hate, in my opinion, it is a matter of educating ourselves to the fact that this is happening in epidemic proportions in our country. Not all police officers are bad, but how can you ignore the ones who are? They continue to punish their families and get away with it all too often.

What solace is there for her children? Once again it is the children of these families that are caught up in the middle and grieve for losing both of their parents. Nobody wins when one parent kills another, especially their children!

I am amazed you don't get it. It's one thing seeking help for bio polar- and another to screw your therapist like a kangaroo. Roe brain washed Lori.

Facts did not come out the defense did not put on a case.
you all have screws missing.

The kids are the ones who will be suffering for years. This is a horrible tragedy. Prayers to the family.