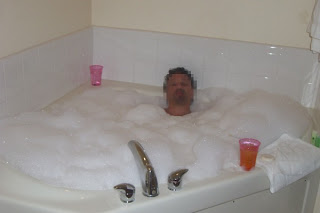 This is a rare photo captured during a happier time on January 1, 2009. Just hours after it was taken, this bathroom would become a crime scene.
The pink cup in the corner has important significance. It was used as a cigar ashtray by the man pictured in this photo, and it was still there, along with the half smoked Davidoff cigar, when police found the body of 22 year-old, Sheena Morris. Sheena was found hanging from the shower. Police, in my opinion, failed to properly log key evidence and interview the only person of interest and the last person to see her alive. Sheena Morris also worked for this man with whom she was in a relationship. With direct ties to the Genovese family, like a child on their mother's breast, from the distribution of steriods, to other illegal drugs and 2 companies operating in the State of Florida, the mini empire was now in jeopardy.
Sheena Morris had obtained damaging evidence on alleged illegal activities. Shortly before she died, the keys to her apartment were taken, she was physically attacked. You would think that the 911 call she makes to police would have an impact on the investigation, or the other facts of significance in her death that are just now surfacing, but they do not. Not even the 4 banker boxes full of files, copies of ledgers, key names and dates and other information, seen carried from the out of the apartment according to witnesses by none other than the last person to see Sheena Morris alive.
Instead, her death is incorrectly ruled a suicide by a Bradenton Beach police department who likely failed their instructional crime scene 101 class. The County Sheriff's office, who have more experience in death investigations of intimate partner homicides, should have been called in to handle this case, and because of the association to organized crime with the Genovese family. 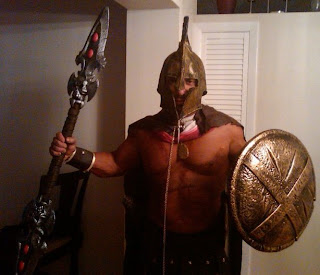 The same person above in the bathtub photo is also that of the man suited up with the mask. This isn't a Halloween get-up either. The photo speaks for itself.
Earlier, on the "Time's Up" show (listen here) we discussed the case in greater detail with Kelly Osborn (Sheena's mother); Sol Vocarro (friend of family); and Tom Shamshak (former chief of police and private investigator).
Coverage will continue for this case next week on the the nationally syndicated The Roth Show (www.therothshow.com) on Wednesday, at 7:00 PM Eastern time, 4/20/2011.
Part 2 of this special investigation series on Sheena Morris will run on Monday, April, 18, 2011.
Article about Sheena Morris' case in the Post-Standard Newspaper:
http://www.syracuse.com/news/index.ssf/2011/04/cause_of_death_for_former_clay.html
Susan Murphy Milano is with the Institute for Relational Harm Reduction and Public Pathology Education. She is an expert on intimate partner violence and homicide crimes. For more information visit http://www.saferelationshipsmagazine.com/ She is also in partnership with Pamela Chapman and iAscend Programs. http://pamelachapmanl.biz

Susan is the author of "Time's Up A Guide on How to Leave and Survive Abusive and Stalking Relationships," available for purchase at the Institute, Amazon.com and wherever books are sold. Susan is the host of The Susan Murphy Milano Show, "Time's Up!" on Here Women Talkhttp://www.herewomentalk.com/ and is a regular contributor to the nationally syndicated The Roth Show with Dr Laurie Roth. Susan is a survivor- the daughter of a police officer family intimate partner homicide by her father who murdered her mother before committing suicide.
at 23:09

Notice that when you google about the murder of Sheena Morris her boyfriend whose face is blurred in the tub is rarely mentioned. His name is Joe Genovese and he was 23 years older than Sheena. He is tied to pot grow houses amongst other crime. It appears he has Bradenton cops on the take