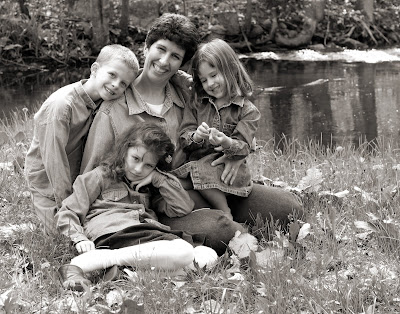 The question is not that Renee Pagel was found stabbed to death in the former marital residence while recovering after donating a kidney to one of her students parents.
The question is why haven't police arrested the person responsible for Renee's murder?
Renee Pagel was killed on August 5, 2006. She was a grade school teacher and a registered nurse. According to friends, Renee feared for her safety from her estranged husband. As many women say when they are married to an abusive spouse "if somethings happens to me, make sure people know it was not an accident."
Renee also changed the beneficiary to her life insurance police, removing her husbands name and changing it to a close friend.
We will discuss this case on Justice Interrupted and other women who have lost their lives in the name of power and control, on Tuesday, May 26, 2009.
at 00:45

I do not understand why the husband has yet to be questioned by police? From everything I read he appears to be the only suspect.

Is this a small town without resources? How about someone contacting the Attorney General's office?

Susan, thank you for making me aware of this case and being such a strong voice for Renee!

This is the first I have heard of this case but it seems pretty cut and dry -- the husband is a likely suspect as he ALWAYS IS in any murder case. I simply cannot imagine why he would not have been questioned UNLESS ... well it seems obvious he is a rich man and we all know money can buy alot. I think you get my drift. Now Renee needs someone with alot of guts to stand up for her and those beautiful (and innocent) children. I sincerely hope that someone does. It would be a shame for these children to be raised by a murderer.

I think if everyone were pointing fingers at me I'd be doing everything to clear my name: providing alibi, volunteering to take a lie detector test, anything to prove innocence. So why isn't this guy doing that? Why is he not out there looking for the killer of his children's mother? How are his children going to feel someday when they realize their Dad did nothing to help solve this?

Awesome point, Maureen...b/c regardless even of everything else...his actions are no doubt SCREAMING at these kids that...

How old are these children? They are going to have some tough questions for their dad some day--if not already, then soon. As deskside said "Why didn't you help to find mom's killer?" "Why did you not allow us to ever see mommy's family and friends?" "Why didn't we ever talk about mommy?"

She also told five friends (and possibly more) that she thought her husband, Michael Pagel, who was divorcing her, would "tamper with her IV" when she was hospitalized for donating the kidney.

She confided to a friend the last day of her life that "he is SO angry...he expected the house, the kids and $2,000 a month". And to another friend "I can't let that bastard kill me....I can't let him have my kids." He, by the way, had found out just weeks prior, that in the divorce settlement SHE would get the house, SHE would get the kids, and HE would have to get a better-paying job to be able to PAY HER what was determined by the judge. They were just days away from the divorce being finalized.

The house in which she was murdered showed no signs of being burglarized. Just Renee...stabbed repeatedly...the day after being discharged from the hospital...in what used to be their marital bed.

What is with the 3 GENERATIONS of suspicious deaths??????

I know Mike and he is scary. I feel so bad for his kids! Every time I see them and when I give them a hug i just want to cry and cry and cry. They don't deserve to have a life like this! They seem fine but I know that inside they miss their mom and are mad at their dad. Mike will not let them talk about renee.
poor kids
poor renee

Another Voice, my recollection of the luncheon was that she said that if she died, "look to Mike". So sad that she was not taken more seriously. Mike is an evil man who disguises himself as a nice, religious guy who is so helpful and nice....underneath that facade is EVIL ITSELF.

Those poor, poor children. God must have a special place in Heaven for such kids.

There is also a place for Mike Pagel, and his evil family, and it is the opposite of Heaven.

The Friend of the Court has blood on their hands. When the court systems try crushing the males, consistently shit like this is going to happen.

In this case the FOC (Kent County) has been out of control for YEARS prior to Judge Sullivan and John Cole who are bright and reasonable men (however their referees are tenured and idiots). Issuing support $$ greater than a person's income will cause people to make their own "laws" as is probably what happened here.

Joint custody would have been a very reasonable solution... but you don't find intelligence or reason at the Kent FOC.

Personally, I don't think Mike did it... but I think a family member did, without a doubt. I think the vigilantes here are barking up the wrong tree.

Innocent until proven guilty. That's the law. Anyone harassing, posting, humiliating is disrespecting the law and should be sued. Let the police do their jobs, soccer moms have no business in this. Go have lunch with your housewife friends.