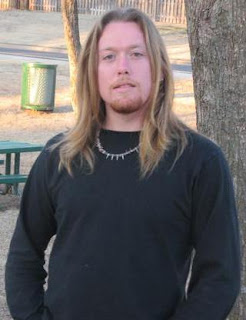 Tonight Intimate Partner Homicide Investigation featured the case of Landon Edwards (pictured above) also known as "Hopper" this is yet another case where :

1.) The Medical Exaiminer's office has refused to properly investigate a murder case;

2.) OSBI has turned a deaf ear for the family to have the case investigated and re-opened;

3.) The death of Landon Edwards, was not a suicide, it was murder.

Landon Edwards, or "Hopper," was just 26 years of age when he was found murdered in Guymon, Oklahoma on August 30th, 2008. The autopsy photo's in this case tell a much different story then what the Oklahoma ME's office listed on his death certificate.

At the time accorrding to family accounts "His girlfriend claimed to have found him upon awaking at 8:38 A.M.. He had supposedly hung himself less than 10 feet away from where she slept, in a room that had no door between her and the victim. The facts speak for themselves. The victim's position at the scene was neither factually or pictorially supporting of a self induced death, suicide. On the contrary, the facts, pictures, events starting in the evening hours of the 29th of August, 2008 leading up to the time of death, strongly support just the opposite: homicide, set-up to support suicide."

The OSBI and an Investigator from the ME's Office were called in to investigate the scene. The victim was later that evening transported to the Oklahoma Medical Examiners Office for an autopsy. The victim had cuts, abrasions, and bruising. Even with the obvious injuries, photos of the scene, blood through out the entire home, blood splatter and events leading to his death, his death was determined a suicide. No officers from the local police department contacted the family for statements. OSBI contacted the family that day for interviews, but took no written statements. The OSBI communicated they would contact family if and when case was closed. Last contact with the OSBI was Memorial Weekend of 2009. The agent in charge was rude and short and communicated the case was still open and offered no other information. The family contacted OSBI in June of this year inquiring of the case, they were told they would release no information including as to whether or not case was open or closed.

The family had to acquire the services of an attorney to get the EMT and M.E. Investigator reports. There are statements the family still has not been able to obtain, such as the girlfriend's written statements.
This family as well as Chanda Turner's family, Sheila Deviney's family, Thomas Horton's family among other families whom have literally been chasing down those in authority who took an oath to serve and protect have been denied justice for their loved ones murdered, in cold blood.

(Susan Murphy Milano, is with the Institute for Relational Harm Reduction & Public Psychopathy Education for more information visit http://www.saferelationships.com/ and is the author of the new book "Time's Up A Guide on How to Leave and Survive Abusive and Stalking Relationships available for purchase at the Institute, Amazon.com and where ever books are sold.)

Evidentiary Abuse Affidavit by Susan Murphy Milano from the Book "Time's Up" from Courage Network on Vimeo.
at 01:17

I pray that these families find justice!!! It is so hard for people to believe that both genders face this problem. My husbands ex-wife was very abusive but worked for the legal system so she basically got away with everything. Even though every knows her temper and is aware of her anger management issues, she got the kids, the house and almost got my husband arrested for bogus charges!!
BOTH genders need to be protected!!! Keep up the wonderful work you do Susan!!

My son was also a victim of domestic violence for 4 years by a certified mentally ill woman. She set him up on two different occasions and both times he was the one who was arrested.He stayed to protect the children from her. He lost his career and his self esteem because the legal system refused to pay attention to the evidence. He was the only one who ever had any marks on him. She never was hit. You are right! Its time for our society especially our law enforcers to wake up and realize women aren't the only ones who are being abused.

I am the mother of a son who was a victim of domestic violence. I watched him being abused by his 'woman' for several years. They had 3 children together and he said he just couldn't leave them. I finally told him he needed to fight back when I watched her, through my kitchen window, jump on his back and start pounding him in the head with her fists. He said I had raised him not to hit women so he couldn't. Fast forward 1 year...he fought for, and got custody of, his children. Fast forward 9 more years...she has had 3 more children with 3 more men and is doing 2 years in prison for assaulting a boyfriend.

I personally knew this young man. He was a very dear friend. I have had unseen suicides in my family, but this was no suicide. The authorities involved should be reprimanded and a true investigation should be completed. This family deserves at least that much. Hopper lives!!

Hopper was a wonderful man who had a smile that was contagious to everyone he met.He deserves justice! His family deserves to have their voices heard and his mother deserves to see justice for her son! He is loved and missed by an entire community!To those who swept his murder under the rug and to those responsible for this heinous crime, I hope u are listening because his family is screaming for justice and they will not be silenced! Justice for Hopper!

I know the woman involved. I believe that the officers involved have closed their ears and have blinded themselves, just wanting the case to be closed. I also know that she had fled to Las Vegas shortly after Hopper's death and because of being in Las Vegas, was not around during majority of the investigation. She currently resides back in the County where the incident took place and needs to be investigated again. I believe there are things that she did not say and/or is hiding. I pray that the officers find Jesus and I pray that she finds Jesus and admits to whatever she has done and/or knows to the proper authorities. In the meantime I pray for the young man that she is in a current relationship with. He is a dear friend of mine and I would hate for him to be in the next report. "May Hopper live forever in our Hearts".