Coward With A Badge is Finally Captured 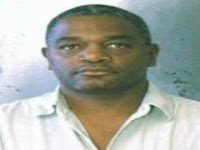 [former police office Derrick Yancey]
Special agents from the U.S. Department of State's Diplomatic Security Service (DSS) located Derrick Yancey in Punta Gorda, Belize. Yancey is wanted in Georgia for double murder of his wife Linda Yancey and a day laborer. Yancey on the run since April was arrested by Belize law enforcement and is awaiting return to the United States.
Yancey was a deputy with the DeKalb County, Georgia Sheriff's Department. In August of 2008, DeKalb County Sheriff's Office charged Yancey with two counts of murder. He was released on $150,000 bond awaiting trial under the condition that he be confined to house arrest. On April 4, 2009, Yancey violated the conditions of his bond and escaped house arrest. In June of 2009 America's Most Wanted featured the fomer officer on their show. Since then, he has been on the run, even eliciting the attention of television's "Americas Most Wanted."
On September 17, 2009, DSS agents in the Regional Security Office in Belmopan, Belize received an investigative lead from the U.S. Marshals Service and the Dekalb County Sheriff's Office on the possible whereabouts of Yancey. Within sixty hours of that tip, DSS agents in Belize were able to confirm Yancey's presence in Punta Gorda and locate his residence.On September 19, 2009, after extensive coordination between officers of the Belize Police Department and personnel in Diplomatic Security's Regional Security Office in Belmopan, both U.S. and Belizean law enforcement awaited Yancey's return to his neighborhood.
Upon arrival at a local bar, at 6:05 PM local time, a DSS agent tapped on Yancey's shoulder and told him "It is time to go." Belize authorities then arrested Yancey.
According to DSS agents, Yancey stated that he was surprised and shocked upon capture. Yancey also revealed he was relieved that he was finally caught and prepared to go home. DSS agents in Washington, DC and Belize will coordinate with The U.S. Marshals Service to arrange for Yancey's return in the near future.
"Diplomatic Security's regional security office in Belmopan maintains an excellent working relationship with local law enforcement personnel, thus enabling Yancey's capture," said, Edgar Moreno, The Bureau of Diplomatic Security's Assistant Director for Domestic Operations. "It's this type of close, worldwide law enforcement liaison capability that gives Diplomatic Security unparalleled ability to locate, pursue, and apprehend fugitives."
Counting Yancey's detention, Diplomatic Security has coordinated the capture of five of America's Most Wanted fugitives in 2009 alone, including previous captures made this year by authorities in Brazil, Nicaragua, Israel, and the Philippines.
at 02:13

Geez! Not all LEO's are cowards. What ever happeened to innocent until proven guilty? Or not does that apply when you write this garbage?

Actually, when I read "Coward with a badge," I thought she was talking about the Diplomatic Security agents. But I have to agree, this guy is even worse.