Silence and The Blue Brotherhood of the Badge Cost Alexis Jackson Age 13, Her Life! 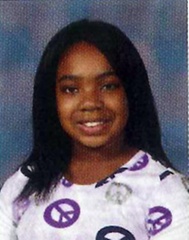 Alexis Jackson, 13, a 7th grade student at Glascow Middle school in Alexandria, Virginia was murdered by her father, John Jackson, a former police sergeant with the Fairfax County Police Department who then committed suicide. He resigned in 2010, around the same time he and his then estranged wife, Cindy, had filed for divorce, citing physical abuse during the marriage. Court Records show the divorce action was dropped in January.

In a story reporting on the murder-suicide in the Washington Post, one comment in particular caught my attention.

As a former co-worker of the wife (Cindy) I am appalled how she was victimized again through this article with such personal specific details about the brutality she endured. I understand court reports are public knowledge but seriously? What is wrong with journalists these days? Those details provided about her past were so inappropriate just to make a an article more 'dramatic'. Shame you Post Reporter.....you are part of the problem for protecting victims privacy!

The former co-worker calls out the fact that Cindy Jackson's abuse should be private, angry that the information was released. What we need to be angry about is the fact that intimate partner homicide is an epidemic and it hijacks the lives of eight to ten victims 365 days year. John Jackson murdered his own child. His actions during the marriage are very much a part of the ultimate act of power and control. In this case he planned out the murder of his daughter to get back at his wife. John Jackson wanted to teach Cindy a lesson; punish his wife by taking away her entire world, her child whom she loved more than life itself.

When we silence the crime, abusers gain more power and control over their victims. John Jackson, while on the police force,  got away with his dangerous and criminal behavior against his wife. He had no choice but to be given the opportunity to resign, save face, or face criminal charges, a special consideration often given to those in the "blue brotherhood."

There is nothing dramatic about violence in the home; it's a crime and against the law. It's not a private matter, especially when a person sworn to serve and protect terrorizes their own family during their job as a sworn law enforcement officer.

Cindy Jackson went out to the driveway up to the parked SUV, screamed out to God as she smashed the glass on the passenger side window and discovered her daughter's lifeless body in the car.

Comments by former colleagues of the Sargeant and others on the Fairfax police department were words of "shock" and "disbelief" about the death of his daughter. But their non-responsive actions to Cindy Jackson's pleas for help while her husband was on the job only fueled the violence in the couple's relationship. There were no consequences to the violent offender. He showed his victim just how untouchable he was. And then, he showed the world who was in control by taking the life of Alexis Jackson, 13 years old!

Before you decide to personally express your opinions, note that I am the daughter of a Chicago Violent Crimes detective who murdered my mother in 1989, before committing suicide.  I know firsthand how these crimes go down.

A national trainer to law enforcement, training officers, prosecutors, judges, legislators, social service providers, healthcare professionals, victim advocates and the faith based community and author.. In partnership with Management Resources Ltd. of New York addressing prevention and solutions within the community to the workplace. Host of The Susan Murphy Milano Show,"Time'sUp!" . She is a regular contributor to the nationally syndicated "The Roth Show" with Dr Laurie Roth and a co-host onCrime Wire. Online contributions: Forbes : Crime, She Writes providing commentary about the hottest topics on crime, justice, and law from a woman’s perspective, as well as Time's Up! a blog which searches for solutions (SOS) for victims of crime

The "shock and disbelief" everyone is reeling from is the fact that everyone knew how much this father loved his child. Everyone that knew John and Alexis Jackson knew that she was his whole reason for living. Alexis LIVED ALONE WITH HER FATHER for a number of years before and up until the night in question. She was loved beyond measure and she loved her father the same way. That it ended this way is indeed a tragedy that I do not condone and can not justify, but trying to make him out to be a monster is just as big a tragedy. There are three sides to every breakup/divorce story - hers, his, and the truth. I can only speak for myself, as a mother and domestic abuse survivor, if my husband was as abusive to me as the reports being made, I'd be damned if I'd leave my daughter to live alone with him for all these years. It has been said, "If you can't say anything nice about someone, try not saying anything at all...". This adage is very true, especially when you don't (and probably never will) have all the details. I understand your anger and I applaud your cause, as would anyone ever affected by domestic violence, but this incident doesn't fit. I wish you nothing but the best in your endeavors.

If this officer "loved his daughter more than life"...and then killed her... we must contend that the hatred and anger he held out for his wife was pure revenge and truly a sickening act! I don't care what you think you know about him... no one can justify the actions of a killer. He didn't love her... she was a pawn in his game of life, a possession to be used when the time came... He only loved himself... the selfish bastard!

Anyone trying to defend this man is beyond my comprehension. And there is NO "side" that can justify him taking his child's life...NONE.

There was only one innocent victim in this entire ordeal - and she now lives in Heaven.

It may be that the premise in your title is correct, but it would be a much stronger assertion if it contained specifics to support the assertion.

One of the challenges that the leadership of law enforcement agencies face is the limited ability to actually impose disciplinary action that can be sustained upon appeal. The Fairfax County Civil Service Commission has a long history of overturning disciplinary action against officers - especially discipline taken against minority officers. As a result, it is often necessary to build a case over time, that is sufficiently strong to compel the officer to resign, in lieu of receiving serious criminal prosecution.

As an example, some years ago there was an officer that committed a number of thefts within the police station. He was terminated on the basis of clear and compelling evidence - along with his confession. The Civil Service Commission overturned his dismissal as being "excessive", despite testimony by the Commonwealth's Attorney (state prosecutor) that these offenses presented a bar to the officer ever being able to testify under oath in court. In other words, he would need to be paid as an officer, however could never be placed in a position of trust again.

Several months later, after being returned to work, this officer committed a serious sexual assault against a fellow employee. In order to compel his resignation, it was necessary to plea bargain the case down to a misdemeanor.

This pattern has been repeated time and time again over the years.

Sorry Co-worker you are totally wrong. Shining a spotlight on what abusers do to their victims may help bring about a change in society and it may save lives by encouraging victims to seek help and by making that help more readily available and effective. Keeping the secret of abuse or domestic violence allows it to flourish.

I believe the police who take part in covering up for one of their number should be held accountable. It is far too common a story.

What happened to Cindy and her daughter was not their shame. The shame belonged to only one person and that person was the abuser who hid behind his police badge.

"That it ended this way is indeed a tragedy that I do not condone and can not justify, but trying to make him out to be a monster is just as big a tragedy. "

BULLSH*T.
He's a MURDERER.
Of his own innocent child.
There is no more heinous crime.
He is a MONSTER.
End. Of. Discussion.