New Meaning For Cop "Till Death Do Us Part" 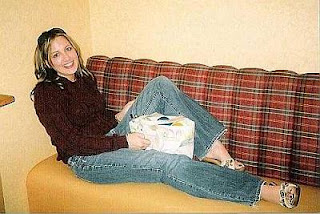 "
Stacy Ann Peterson has been missing since October 28, 2007. This week marks her tragic disappearance. Friends and Family need the public's help as they continue to search for Stacy.

On the blog this week we will feature some past posts written on the case. The first is a post from October 29, 2007. It is also prior to Peterson lawyering up with my favorite "legal marshmallow roaster, from the law firm also known for their chicken wings and thighs defense. Or is it hot dogs and hamburgers?

Back in 2004, officer Petersons wife was found dead in a bath tub and for some reason the coroner ruled that death as accidential. And from the reports at the time there was not enough evidence to prove otherwise. And now, there is yet another wife missing .

Apparently, not a peep from our cowardly man, her officer husband on where his wife could be.
"Because he's one of our officers, we thought it would be better to have an independent agency investigating," Mayor Roger Claar said of the state's involvement in the disappearance of Stacy Peterson.

In my opinion, do I believe he is capable of harming Stacy? Absolutely!

RELATED STORY (From the Chicago Sun-Times and reporter Joe Hosey)
It was not clear how long Peterson, the wife of Sgt. Drew Peterson, has been missing. State Trooper Mark Dorencz at first declined to comment on the matter but later said the state is handling the case as a missing persons investigation.

The Bolingbrook department said Peterson was not scheduled to work Monday. A message left for him at the department went unreturned.

Peterson's previous wife, 40-year-old Kathleen Savio, was found dead in the dry bathtub of her Pheasant Chase home in March 2004. Peterson and Savio were divorced and he was returning their two sons to their home after a weekend visit, but no one answered the locked door.
Peterson went to a neighbor's to call a locksmith. Once entry was gained, the neighbor went inside and found Savio's body in a waterless bathtub.

The investigation revealed Savio drowned. Her fingertips showed pruning from being submerged in water and her hair was wet when she was found. While there was no water in the bathtub, it may have drained out over time, as the plug was down, investigators speculated.
A coroner's jury ruled the death accidental. State police investigated that case as well. No charges were filed.

According to one official, Savio was Peterson's third wife, and Stacey Peterson is his fourth.
Charges, reinstatementMore than 20 years ago, Peterson was fired from the police department after the village board of police and fire commissioners found him guilty of disobedience, conducting a self-assigned investigation, failure to report a bribe immediately and official misconduct. He had been indicted two months earlier on charges of official misconduct and failure to report a bribe. Peterson was working under the auspices of the Metropolitan Area Narcotics Squad at the time. Indictments alleged he solicited drugs in exchange for information about his agency.

The charges later were dropped. Special prosecutor Raymond Bolden said at the time that the charges were not provable.

Reading this gives me the creeps knowing droopey could be so cold blooded and kill the mothers of his children. I pray neither of the women suffered.

Thank you for helping the pubklic remember Stacy Peterson is still out there.

A chicken defends a hot dog of a client theres a concept. I hipe Stacy is found soon.

Tuesday, October 27, the WE network show: “Secret Lives of Women” is airing an episode called “Loved & Controlled” which will feature three stories, one of them the Drew Peterson cases. Anna Doman and Cassandra Cales , will be talking about their sisters, Kathleen Savio and Stacy Peterson and what life was like living with Drew Peterson.