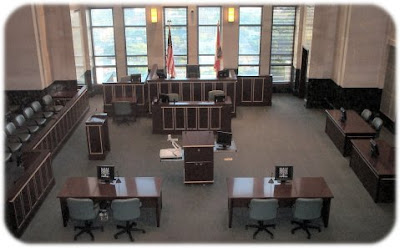 Sua Sponte – It's Latin, meaning "of its own will." I am asking for United States Attorney Patrick Fitzgerald's office in Illinois , to investigate in the case of Drew Peterson, of it's own will. They have the track record and the tools to investigate this case. Grand Jury or not, the State currently lack resources and expertise.

The Will County State's Attorney's Office do not have a body, a confession or a witness in the potential homicide of Stacy Peterson. And no one in the State of Illinois since 1850, has ever been convicted of murder without a body. And a damage dance of sorts is being done with regards to Kathleen Savio's murder.

But, there is a similar case on which I base my remarks, Thomas York a Chicago Police Officer, knew enough that investigators and the State's Attorney's Office would not be able to charge him with the murder of his wife or his business partner in April of 1981.

To sustain the charge of mail fraud, the government must prove the following propositions:

First, that the defendant knowingly participated in the scheme to defraud as described in the indictment.

Second, that for the purpose of carrying out the scheme or attempting to do so, the defendant caused the United States Mails to be used in the manner charged in the particular count; and

Third, that the defendant did so knowingly and with the intent to defraud.

This in my opinion, based on research, Federal Prosecutors can charge Mr. Peterson with mail and insurance fraud. Kathleen Savio died a few weeks before she was to receive her settlement. Court documents and other related information not provided to the public regarding their divorce and the fact that Drew Peterson was already married and living a few houses away at the time, had motive. Add in the fact, Drew Peterson was a trained police officer, and a trained locksmith.

Documents pertaining to insurance, correspondence and pleadings regarding the "accidental death " of Kathleen Savio were also sent by United States mail. And that is where the feds come into this case.

State's Attorney Glascow must now look beyond a murder charge in this case. The statue for mail fraud and insurance is 5 years which comes due in February of 2009.

To The Relatives of Kathleen Savio and Stacy Peterson, my hope is that justice prevails in the deaths of your loved ones. But, to do this you must be diligent and remain on the door steps of the Will County State's Attorney's Office.

You must also send letters to Patrick Fitzgerald's office asking for them to look into your request. Then gather volunteers and begin a media campaign. Ask those stations who have given air time to both Mr. Peterson and his legal defense to allow you the same courtesy.

Prepare your remarks on paper, stand tall and allow no one to move you off the path of truth.
You have lost enough already!
at 01:32

OMG this is great. How come nobody has talked about his as a possibility?

The case is polluted enough and a fair trial seems unlikely from public opinion. Charging with mail & insurance fraud is a stronger legal direction.

Keep forcing people to think beyond the obvious. Claire,IL

This is a good opportunity to view other alternatives besides or in addition to possible murder charges. Great udea & post.

Hi everyone, we need to get this publicized. Please email NancyGrace@CNN.com
Maybe Nancy and the legal experts can analyze this.

Pssst. You mention that they don't have a body in the Kathleen Savio case. I hope that was just a typo.

It was a typo and thank you for correcting the error.

Leave it to your years of client advocacy and talent for looking outside the obvious. Leaving enough clues in your posts to make a lot of people nervous as only you can.

This case gets crazier by the day between garage door openers, finger pointing & restraining orders by neighbors. And Brodsky wants to scramble the public focus away from his client to show a neighbor joe regular guy who had nothing to do with their murders. Follow the lies since day one, going back as far as 1985. Peterson doesn't have bad luck in his life he is a bad actor in real life human tragedy.

Here's a link for Stacy Peterson-maybe people can post it in their community.

Oh man ... the arrogance and sheer audacity of this guy Drew Peterson just kills me......
http://www.squidoo.com/drewpetersondidit

With amount of people on this case you would think that the wheels are already in motion. Each time I see this case in the news I think of the children and what they live with everyday. Thank you for a great post!

I was really moved with the information and ideas you provided. FYI- Website for Stacy Peterson is www.findstacypeterson.com-thank you

Following the forgery will lead you to the crime.

I am sorry about your own personal loss. I just finished reading Defending Our Live I tried to get your other book too but the library did not have a copy. Your words & voice is very important for people like me.

The dvorce lawyer stated Kathleen savio had no will and then one appeared thats fruad it should be easy to charge him. FYI the headline and link to the story:

Kathleen said she had no will, lawyer recalls
Saturday, March 08, 2008 --- 11 days ago
http://www.suntimes.com/news/peterson/832553,CST-NWS-boling08.article
While she was divorcing Drew Peterson, Kathleen Savio said she didn't have a will, her former lawyer said Friday. Attorney Harry Smith's statement raises new questions about a two-page, handwritten will that Drew Peterson unveiled 15 days after his ex-wife drowned in her bathtub in 2004. ...

His statment has credability. And he also talked to Stacy. This could go someplace.

Wanted to say thanks to you for keeping watch on the case.

Amidst all the shuffle & pure stupidity within the legal community my guess is a lot mud more throwing will happen until someone has a light bulb moment. Very tragic for all involved including Mr. Peterson.

I guess you about know the "Hot Seat"list. Please don't let them bully you.

Prayers to Stacey her children and family.

Looks like the family is gearing up for more searchs for stacy. Aybody able to volunteer should visit http://findstacypeterson.com

Wanted to say, thanks, you are one of God's special soldiers in this war!

Really a good post. Susan you did your homework on this one. Keep on jumping up and down.