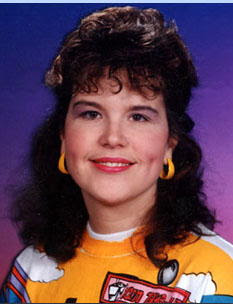 Texas-Mary McGinnis Morris, a nurse, was murdered on October 15, 2000 and her body was found by a tow truck driver on October 16, 2000. Mary had been abducted, beaten and shot in the head. The scene of the crime was staged to look like a suicide, but evidence at the scene and the autopsy report showed that Mary had been gagged, restrained, and viciously beaten before being shot in the head. Mary had put up a fierce struggle for her life that left her clothes torn and bruise marks on her body. Blood was found on the passenger door, which was open and the keys were outside the car. Police do not suspect robbery in this crime.

Mary and her husband, Michael James Morris, were having marital problems and law enforcement cannot eliminate him as a suspect. Mary's life insurance policy was for $700,000 and he was the beneficiary. Another fact is that two hours after Mary's death, Mike Morris placed a call to Mary's cell phone that lasted for 4 minutes and the call did not go to Mary's voice mail. The call showed up on the cell phone bill as "completed". Mike Morris denies any involvement in his wife's death. Mary was also having difficulty with an ex-employee who also cannot be eliminated as a suspect.

I know someone out there has information or saw something that day. Please go to authorities and tell them what you know. Mary McGinnis deserves our help!

If you have any information about the unsolved homicide of Mary McGinnis, please call Crimestoppers (713)222-8477 or Sgt. Parker of the Harris County Sheriff's Department at (713)967-5810.

A $10,000 reward is being offered in the case. The Carole Sund/Carrington Memorial Reward Foundation, based in California, offered $5,000 on top of the original Crime Stoppers reward for information that leads to an arrest and conviction in Morris' murder.

Location of crime: Hwy 290 at West Little York in Houston Texas
Birthdate: July 10, 1961
Age at date of crime: 39
Height: 5'9"Weight: 140 lbsBuild: MediumHair: BlackEyes: BrownRace/sex: White/FemaleDistinguishing marks: Mary had a lazy eye and a tattoo of Mickey Mouse on her hip.
Clothing: Mary was wearing black slacks and blouse with boots.
at 00:02

Mary McGinnis Morris was my sister. I want to THANK YOU for helping the family get her story out. It may be your blog that help get this horrible crime solved. The most important thing is getting it in the public. Again, thank you from the bottom of my heart.

Mary Morris was my mother. I appreciate the effort in trying to solve her murder, but please get the facts striaght before you post them. You claim the insurance policy was for $700,000; I inherited the insurance policy last April and I assure you that it was not nearly that much. And my mother was legally blind in one eye, but I wouldn't go as far as calling it lazy.

First of all I want to offer my condolences to both Stephanie and Katy. I just saw the Unsolved Mysteries segment on the Mary Morris murders and as a Houston resident my curiosity about this case was piqued. I just wanted to point out to Katy that the Unsolved Mysteries segment about Mary McGinnis Morris also mentioned a life insurance policy of $700,000. My understanding of the Harris County crime lab is that they have history of incompetence. You may wish to bring to their attention any inaccuracies in the story as I believe they are the ones responsible for disseminating the facts, however (in)accurate they may be. That said, I highly doubt that two women with the same first and surname and from the same city being murdered in such a short period of time to be a coincidence. I believe dismissing any connection between the two murders to be another sign of the incompetence of the Harris County investigators.

I don't think they are so incompetent. They just can not prove that Laurie Gemmell killed Mary Morris. I have had enough evidence but it is not enough for a court case.

This case should be reopened and and researched exhaustively. This should not happen.
duaneyoungster@gmail.com

Mike Morris said, "I had absolutely nothing to do with the arrangement of
Mary's death."

Perhaps Michael's guilt in having actually arranged for Mary's death by paying a hitman may have just popped out in his supposed denial.

Mike......if you are innocent why did you refuse to cooperate, not let Katy speak, and move to WV immediately after Mary's murder?