A Lesson for The World: Susan Cox Powell and Her Children 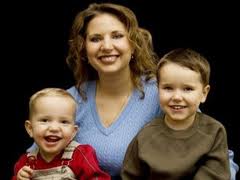 Susan Cox Powell's murder, along with her children's premeditated killings at the hands of their father, is a front row seat to missing persons cases, inadequate children and family services, criminal investigations, family court and a community who stood in silence.

The Huffington Post is now reporting on, after two innocent children are blown-up, and releasing numerous emails Susan sent to co-works, friends and family.

Nine emails were provided to the newspaper after Susan Powell disappeared in December 2009, but at the request of the provider, the newspaper held back on publishing them until now.

"Every moment I step back and take stock of what I'm dealing with, it feels like a never ending cycle but I'm too afraid of the consequences (sic) losing my kids, him kidnapping, divorce or actions worse on his part, if I take a stand on one of his ultimatums like spending $20 on the counseling co-pay or cutting off access to my pay check," she wrote.

When Susan Cox Powell vanished, it was disclosed by the oldest of the boys, "mommy went on a camping trip with us but she didn't come back." West Valley city police, for unknown reasons, decided to sit on evidence; blood, child's disclosure, a letter found in Susan's drawer at work stating "if something happens to me." There was enough within weeks to prevent Josh Powell from leaving the state of Utah and making an arrest. What in God's name were they waiting for?

Why are these emails just now surfacing? If Huffington Post thinks this is a "hot news story," they are mistaken. This is pure ignorance to the seriousness of the crime immediately after Susan was reported missing. They had an opportunity and an obligation to either turn those emails over to law enforcement and or report on them in a timely fashion.

Has anyone from a church in the State of Utah taken any pro-active action pertaining to the importance of what to do if a member of their congregation is in an abusive relationship ? They remain as hushed as the victims whose lives are erased. Why? Because intimate violence remains behind closed doors. Susan Cox Powell lived and breathed a crime scene in her own home each time verbal and physical threats were made to her safety. There are others like Susan, sitting in those church pews on Sundays, are we making an effort to help them? The answer is no!

I'm not here to win friends or influence public opinion. Unless you have lived and breathed your childhood and teen years wondering whether you will live or die, you have no room to be upset with anything done to change how the world does not see these crimes of intimate partner violence and homicide.

Pastor Neil Schori wrote on his blog in February:


I’ve spoken with many domestic violence activists and also with victims of abuse. One of the most common things they say is that they have not found churches to be supportive of them. Activists tell me that it is almost as if pastors and church leaders don’t actually even hear what they are saying. Victims have told me that pastors have condescendingly told them that they are involved in active sin by attempting to divorce their violent abusers and that they needed to go home and submit and “suffer for Jesus.”

This should make you angry and sad. AND ready to stand up and say NO MORE! The church should be a refuge for victims of abuse. Abusers should look at the church as a dangerous place for them to pull out their false-piety and sugary sweet manipulation.

Jesus came so that we would have overflowing, beautiful life. That certainly includes victims of domestic violence. Will you help us?

I’d love to add you to our growing list of safe families for victims of domestic violence. Send me a message if you are interested in learning how.

Since the disappearance of Stacy Peterson on October 28, 2007, Pastor Schori is working to get the faith based communities across the counrty on board with the Evidentiary Abuse Affidavit located on the Document The Abuse. com site.

Maybe the Huffington Post can write about what is actually working to save lives. Printing these emails now is a crime all by itself!

A national trainer to law enforcement, training officers, prosecutors, judges, legislators, social service providers, healthcare professionals, victim advocates and the faith based community and author.. In partnership with Management Resources Ltd. of New York addressing prevention and solutions within the community to the workplace. Host of The Susan Murphy Milano Show,"Time'sUp!" . She is a regular contributor to the nationally syndicated "The Roth Show" with Dr Laurie Roth and a co-host onCrime Wire. Online contributions: Forbes : Crime, She Writes providing commentary about the hottest topics on crime, justice, and law from a woman’s perspective, as well as Time's Up! a blog which searches for solutions (SOS) for victims of crime Susan is also the daughter of a Chicago Violent Crimes detective who murdered her mother before committing suicide.
at 00:26

Absolutely love love love this post! This family was failed in so many ways. And among many churches, DA and sexual violence are still not talked about enough.

Through years of involvement with an online support group for people dealing with abuse in a relationship I have become aware of how frequently and how badly churches and pastors fail women who are being abused by their husbands. Women are being told it is their duty to stay no matter how extreme the abuse they are experiencing or how dangerous their situation. They are being told that they can not leave their marriage as to do so will see them condemned for eternity. They are told to go home and be more obedient and a better wife to a man who has no interest in being reasonable, a man who is often cruel, selfish and controlling. Those who do flee for their lives or their sanity often find themselves rejected and ostracised by the church community while the man who uses and abused them is embraced as if he were the victim.
Too often I have seen women too afraid to remain in their marriage but also too afraid to leave because of their pastor's counselling and the beliefs of the church they belong to. The core belief appears to be that women must submit no matter what and that they have no right to self preservation or safety. The core belief is that it is the woman's fault rather than the perpetrators.
I don't doubt that women do die because of these beliefs and that thousands of others suffer along with their children.

This is my worst fear-- and one that I live with.

There needs to be change- in our court system, police departments and many other places.

Regardless of which publication it is... Huffington Post or whatever, it's always about what will grab headlines versus the truth and failings of the situation.

Pastor Neil is a pioneer, but has a rough road ahead. Just because they are "persons of the cloth," it is obvious that they don't want to "rock the pulpit" on Sunday. Flowery sermons are easier to deliver than the hard realities of intimate partner violence.

It is absolutely shameful looking back on the laundry list of "mistakes" leading to murder. Susan and her children deserved a far better chance at happiness than they got. And... I respectfully disagree with SMM's statement at the end of her blog... She is indeed here to alter public opinion on a vitally important issue that is turning into "take a number at the cemetery"...And so needlessly!
Don't let Susan Powell's death be in vain... or Susan Murphy Milano's mission fall on deaf ears.

When will people realize this is NOT the Aesop's fable, "The Boy who Cried Wolf." Intimate partner Violence is as real as it gets!