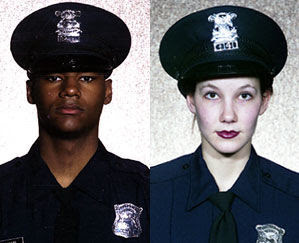 He called her hoping to reconcile asking her to come over to the library and talk to her and they met in the library parking lot,” according to police. “She went to talk to him and that’s when the shooting started.”

Within minutes of meeting, shots rang out in the parking lot of the Canton Public Library as an off-duty Detroit Police homicide investigator shot and killed his wife, also a Detroit Police officer, who committed suicide.

Members of the Detroit Police department knew the marriage between their “buddy in blue” Detroit homicide detective and his police officer wife was increasingly violent.
Over the weekend, Officer Patricia Williams went to the Canton police station to report that her husband had assaulted her. 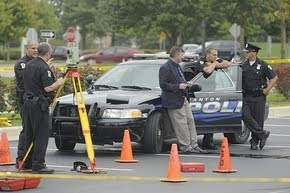 "But she decided not to press charges and she did not cooperate with the officers when they asked for more information” according to law enforcement.” I will wager because the officer was a television star on A&E’s the “First 48” Patricia Williams was discouraged from swearing out a formal complaint that would tarnish the violent cowardly tin badge reputation of not only the detective but, the department’s revenue from the A& E reality show.

In one episode, cold case Detective Williams said that he didn't understand why people commit murder."When you have a situation, and it was that brutal, you look at it and you're like 'what type of individual would do something like this?' It amazes me that people are willing to just end someone else's life. If I was here for 25 years I would never be able to make sense out of it," Williams said.
The cold hard facts to this senseless tragedy are it could have been prevented. It is easier to say “she refused to press charges” because who is going to dispute the police departments claims now? She is dead! There was no “department protocol” in place to assist Officer Patricia Williams or anyone else in this Country who are married to violent offenders.
This Detroit department looked the other way when on the morning of Patricia’s “preventable” murder they stood in silence right beside Detective Edward Williams as he aimed and fired.
This only adds to fuel to the alarming epidemic of "Blue Defending Blue" if you are in a relationship with an abuser in law enforcement as a victim can you can expect the truth to be swept among the leaves that will eventually cover your final resting place!
at 06:20

This doesn't solve the problem when you bash the agency. Where you there? Do you know what transpired?

May they both rest in peace.

This is a horribly tragic situation. I wonder if LE had even discussed the violence against Patricia with him since she didn't press charges. I feel this was preventable just as many many other officer involved spousal abuse, spousal murder and suicide is preventable.

You said: "This Detroit department looked the other way when on the morning of Patricia’s “preventable” murder they stood in silence right beside Detective Edward Williams as he aimed and fired."

How did you arrive at that? Do you have inside info?

I'm sorry - rereading that it came out wrong. The gun on the ground is not the same make as the currently issued weapon so me and the gurlz have been wondering a few scenarios of a removed weapon - or not, him being on leave - or not, him complying with what Detroit PD told him to do - or not. Etc. I will guess also that DPD did not have a specific policy - but I'd like to know for sure.

But more than anything I want to know Katie's story. (She identifies herself as "Katie Ryan-Williams" on her facebook page.)

I want to know why the paper is dropping the ball on the note that "Ed" left. It certainly WAS a suicide warning. I'd like to know what happened after Canton PD told Detroit PD aBOUT the note. That's why I'm asking about your statement that Detroit PD IS guilty. I'm still wondering, but you know - so I'm wondering if you have access to info on this case about the series of events that didn't make the paper.