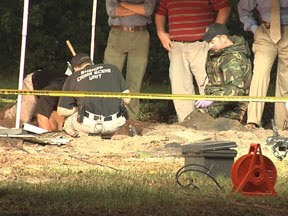 Randy Bratschi was last seen by friends and family, alive, according to police reports leaving his job at Smurfit-Stone Container in Florence the morning of Nov. 26, 2004  On July 16, 2009 his skeletal remains were recovered in Coward, South Carolina.. When Randy Bratschi’ disappeared, his wife Brenda Bratschi was out of jail on bond following an arrest for assault and battery with intent to kill in connection with serious assault against  her husband, Randy. For five years law enforcement searched for him.  Thousands of man power later including the CUE Center for Missing Persons, he was found.
In 2004, Brenda was accused of beating Randy Bratschi with a wooden club commonly used by truck drivers to strike the tires on 18-wheelers to check air pressure.
Brenda Bratschi is currently on trial for his murder.  Yesterday, her defense attorney filed a motion asking the court to consider a directed verdict to acquit Brenda of the murder of her husband.  When the court reconvenes this morning the judge will decide the motion.
The pattern of conduct in cases of men who stand trial and murder their wives; mirror’s those of women who kill.  Brenda Bratschi is no different, except she is a female. ;
Consider how and where Randy’s body was discovered.  Movers were transporting a trailer on property owned by Randy when he was alive.  Common sense says the body didn’t magically get buried by itself,  It was hidden in that  location by the killer.  The person who’d not banked on the fact the property would be sold and the trailer moved, Brenda Bratschi.
The area where he dies was isolated, and on private property.  No one would able to see Brenda Bratschi burying Randy.  In addition, remember the judge’s order prohibiting her anywhere near him?  So when Brenda is questioned by detectives she gives the tired old response of “I don’t know where he could be,” followed by the shrug of both shoulders and of course, hiring a criminal defense attorney.
Brenda Bratschi had already violated the order of protection secured by Randy twice.  There were 911 calls placed and in ever so clever killer form, the pattern of conduct was attempted by Brenda as she places one of the 911 calls claiming to be a victim of abuse.  But it doesn’t fly. Detectives don’t believe her, nor does the judge who’d issued the original court order of protection.
Randy Bratschi was ending his relationship with his violent, dangerous and abusive wife.  She’d become more violent as the couple ended their marriage.  Important to note: remember she was charged with assault and battery and an attempt to kill. These charges were open and pending when randy vanished of the face of the earth without a trace. Another common theme of intimate partner homicides; hide the body where you know and right under everyone's noses. This woman proves she’s no girl scout and in cases of intimate partner violence, there is never a next time for any victim.
This case isn’t about a judge and a courtroom sending a message.  This case is about justice for Randy Bratschi, age 54 who lost his life as a result of intimate partner homicide.  The jury can render justice in this case if they carefully review the facts and the pattern of conduct leading up to the murder. The defense attorney is doing his job for his client by creating doubt while trying to disarm a court and dilute the facts of premeditated cold blooded murder.
Let’s pray the presiding judge denies the defense's motion and agrees to proceed with the trial.
Susan Murphy Milano is a staff member of the Institute for Relational Harm Reduction and Public Pathology Education as a educator and specialist with intimate partner violence prevention strategies directing prevention for high risk situations and cases.


A national trainer to law enforcement, training officers, prosecutors, judges, legislators, social service providers, healthcare professionals, victim advocates and the faith based community and author.. In partnership with Management Resources Ltd. of New York addressing prevention and solutions within the community to the workplace. Host of The Susan Murphy Milano Show,"Time'sUp!" . She is a regular contributor to the nationally syndicated "The Roth Show" with Dr Laurie Roth and a co-host onCrime Wire. Online contributions: Forbes : Crime, She Writes providing commentary about the hottest topics on crime, justice, and law from a woman’s perspective, as well as Time's Up! a blog which searches for solutions (SOS) for victims of crime Susan is also the daughter of a Chicago Violent Crimes detective who murdered her mother before committing suicide.
at 00:34

Perhaps Mr. Randy would be alive had his abuser & murderer not been allowed to bail out of jail, arrested after she violated the p.o. twice.

Her greed and psychosis led to this tragedy.

Hopegully, in the future, Legislatures will make any type of violation of a DV p.o. a SERIOUS felony punishable by a mandatory jail sentence. Set an example.


This woman was simply trying to prevent Mr. Randy from discovering her serious gambling addiction and squandering his money away. So sad.

That confession, in which she claims Mr. Randy flagged her down, asked her to go home with him, kissed her, asked her to come back to him is, in my opinion, the rantings of a dangerous, delusional sociopath.

I don't believe a word of it and, apparently, neither did that jury. Hogwash! She tried her best to kill that man with that wooden object.

When that didn't work, she moved on to plan B.

After he disappeared, she was arrested twice on forgery charges. She was looting other people of their money also. Her siblings admitted in court that Brenda had wiped out THEIR bank accounts too.

She has a serious problem. You take a life over gambling?? I'm glad her siblings and her other victims did not as end up dead because of her greed and addiction.

She is where she belongs: in a cold, dank prison cell for what is left of her life.