March for Justice in Tampa Florida for Sheena Morris on Sunday July 29, 2012 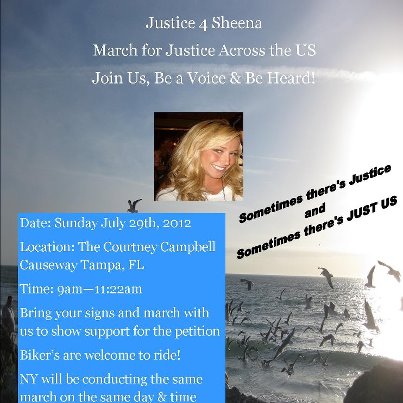 If you have been following this blog, you're familiar with the case of Sheena Morris, age 22 murdered in a hotel in Anna Maria Island, FL on January 1, 2009.

The intial death certificate stated cause of death as "suicide."  The lack of experience by the responding "detective's" at the crime scene make  the character created on the Andy Griffith show- Barney Fife look like a genius.

I presented the Sheena Morris case including the original  crime scene photo's at the Indiana Coroner's Annual conference this past weekend.  The response of over 400 deputies and coroner's in attendance, the photo's clearly indicate homcide.  Why hasn't the case been re-opened since the medical examiner changed the death certificate to "undetermined?"

I explained to the audience that the City of Bradenton Beach, Manatee County and State of Floirida are refusing justice because they are afraid of being sued by the family of Sheena Morris because they flucked up the entire investigation.

If you can come out, lend your voice show support or re-post this on your twitter and facebook accounts, it will show a collective force of action in the name of justce4sheena.com .  The family is asking for the case to be re-opened.  Bradenton Beach Police are refusing to do their jobs!

A $10,000 REWARD is being offered to the person providing information that leads to an arrest & conviction for the murder of Sheena Morris on January 1, 2009


Reward is being provided by the family of Sheena Morris