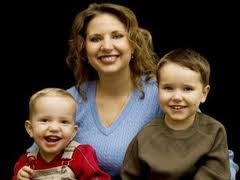 On December 6, 2009, Susan Cox (Powell) vanished from her Utah home. Her estranged husband, Josh, was allowed to leave the State of Utah with their two boys, then ages 2 and 4, moving in with his father, Steven Powell, in Washington.
In November of 2010, Steven Powell, along with his son Josh, broke their silence, a month shy of the one year anniversary of Susan Cox's (Powell) disappearance. The interview was laced with both men's words, screaming, in my opinion, answers.
Over the summer came a break in the case as both father and son sat down with ABC's Night-Line for an extensive interview. The result of that began, in my opinion, the unraveling of the world of the Powells. The father-in-law's remarks sparked a long awaited investigation at the Steven Powell residence. FBI agents and investigators took computer hard drives and other evidence from the home.
Late Thursday, Steven Powell, who many believe has direct knowledge in Susan Cox's (Powell) disappearance, was taken into police custody and charged with multiple counts, including child pornography. The boys, Susan's children, now ages 4 and 6 were removed from the home and taken into protective custody. Susan's parents went to court in hopes of gaining custody of her two sons.
In court today, there were two hearings, one as it relates to the children, the other for Steven Powell's bond hearing where bail was set at $200,000.
If Steven Powell remains in jail, will Josh Powell, who depends on his father, finally crack? Will the children be able to provide important insight for investigators about their mother?
Let's hope and pray the current search efforts for Susan Cox are successful!
On a side note: Curious if the jail cell Steven Powell is occupying has room for one more, occupant?
Latest on the case from journalist, Isabelle Zehnder:
http://www.examiner.com/missing-persons-in-national/steve-powell-arrested-former-friend-shocked-charges-involve-children
Statement Analyst, Peter Hyatt:
http://seamusoriley.blogspot.com/2011/09/chuck-cox-seeks-to-save-children.html
http://murphymilanojournal.blogspot.com/2011/07/susan-powells-killer-plays-game-of.html
http://murphymilanojournal.blogspot.com/2011/08/susan-powell-case-obsession-leads-to.html
http://murphymilanojournal.blogspot.com/2010/11/susan-powell-to-be-chewed-up-like.html
****
Susan Murphy Milano is a staff member of the Institute for Relational Harm Reduction and Public Pathology Education. She is a specialist with intimate partner violence cases and prevention strategies and high risk cases and available for personal consultations through the Institute. She is also part of the team atManagement Resources Limited of New York.
Susan is the author of "Time's Up: A Guide on How to Leave and Survive Abusive and Stalking Relationships,"Moving out, Moving on, and Defending Out Lives. Susan is the host ofThe Susan Murphy Milano Show, "Time'sUp!" . She is a regular contributor to the nationally syndicated "The Roth Show" with Dr Laurie Roth and a co-host on Crime Wire.
at 00:09

Holly cow! This story is so bizarre! Thank God for investigative reporters and friends/neighbors who grow a conscience!
Although police are denying that the crimes are unrelated...how could they not be linked?

Possible scenario: (What do you think, fellow bloggers?) Steve Powell's obsession took over. He was either confronted by Susan in a mother's rage when she found child porn...Or, Steve saw an opportunity to find her alone, forced himself on her, when she wouldn't comply, he killed her.

Josh Powell perhaps had a much stronger allegiance to has father than his wife. Josh probably assisted in the disposal and cover up of the crime.

And... Josh doesn't have a sense of reality and couldn't even make up a realistic story as to camping in the middle of the frozen night while fans were on in the house to try to cover up evidence-body fluids!

The truth always wins... and we will know sooner than later in order to honor Susan Powell with dignity!
(Thanks for allowing me to vent!)