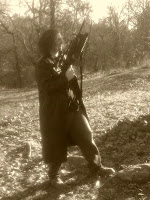 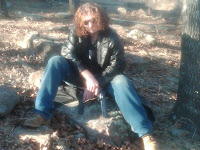 The 3 photo's above are of Keven Joe Sweat. On August 3, 2011 he was arrested and charged with the murder of Ashley Celeste Taylor, 23. Police recovered her remains on August 10, 2011 in Okmulgee, Oklahoma.
Ashley Celeste Taylor went missing on July 15, 2011, as in most intimate partner violence cases Sweat told numerous stories about his fiance' search teams combed various areas until her remains were finally recovered.
But this may not be his only murder. The activities of Keven Sweat begin with a forum he is a member of under the name "Deviant" below is a partial journal entry dated April 14, 2011.
Well america, what can I say? World's gone to shit and when you look at everything, it was only a matter of time.

Anyway, back to me, I got in touch with one of my friends that I haven't spoked to since a bad confrotation between her and my 'fiance', which I probably shouldn't of talked to her, cause she has had feelings for me, which I don't feel the same way, she's trying her damndest to get me to come to California to be with her.........NO! FUCK NO! She's trying to get me in trouble. *sigh* Guess I had it coming, but it won't matter in a few months, I'm taking every step I can to make sure I can start over in life whether people like it or not, it's my fucking life, not there's!


Your thinking, "Come on Josepi, it can't get any worse." Wanna bet?

Remember Tabby? The Tabby I've had a crush on for damn near a year? Well, I was gonna tell her how I felt before I left, least I could do even if Im not coming back. Well....she's now seeing someone...I kinda feel like an idiot cause I thought I had a chance even before all this shit...maybe I was lying to myself, try to find something to make me feel more real instead of a ghost who can only be seen on the web (no seriously, I try to speak and get cut off by someone else, even when I try to push it).

I'm not gonna lie, I fucked up alot over the years, but how many people do you know is willing to admit it. If I could go back, tell myself it ain't worth it, I would...but we both know I can't. When my brother died...well...part of me really did die, and I don't like myself even more than I did 10 years ago. Guess you can say that's why I'm leaving, to in a way...ok, not actually kill myself, but kill off Josepi. Go something, change my name to something I like (come on now, who wants the last name 'sweat'?........exactly)

People might think that what I'm doing is extreme, but how far will you go to change? To break away?

Last year I was at Petsmart, I was looking at the birds, and saw a lone parriot in a cage. I was just staring at it, and it stared right back at me, and that's when I realized we are all more like birds in a giant series of cages. In our own cage, looking out to the 'outside' world, and into everyone elses cage, expecting each other to do the same thing in our cage: eat, sleep, walking around, fly (if we could).

We must allow ourselves to continue this pattern, to be kept as birds in a cage. Whether we live long and 'fulfilling' lives isn't as important as the media makes it out to be, but what matters is that we choose to be free, break from our cages. Fly far...fly high...never be captured again...
Is there a connection to Keven Joe Sweat in the unsolved murders of Skyla Whitaker, 11, and Taylor Paschal-Placker, 13, who were found dead in Weleetka three years ago on June 8, 2008? There is an aggressive investigation and according to sources law enforcement are piecing together what could possibly result in Keven Sweat being charged for the girls murders.
Would it take Ashley Taylor's murder for OSBI and the FBI to see the connection between Sweat and the girls murder(s) in 2008? We will never know if in someway Ashley stumbled onto information and Sweat could not take the chance so he killed her.
An award for information is still being offered in the girls murders that brings an arrest and conviction in the slaying is up to $160,000.
Anyone with information on the slaying is asked to call the OSBI at 800-522-8017.
Previous Stories:
at 02:24

LE knew Kevin was dangerous !!! If they had come to me about it two months ago, Ashley would be alive today and Kevin would still have been arrested!

Who took the pictures?

I'm guessing they were taken by an aunt or one of his brothers. This being based on the comments under one of the pictures. Those pictures were posted in 2011. They were taken sometime before Taylor and Skyla were murdered.... Based on Kevins hairstyle before during and after the girls were killed..