Florida Dept. of Law Enforcement versus Bruised Egos in the Murder of Sheena Morris 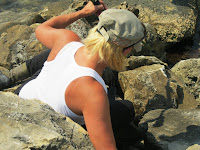 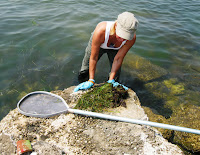 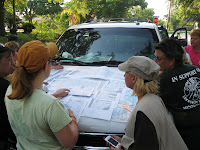 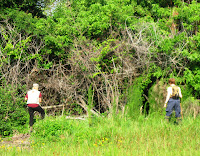 These are photos from the Kelly Rothwell search, the police cadet who went missing on March 12, 2011. Kelly Rothwell's boyfriend was the last person to see her alive. The family contacted the CUE Center for Missing Persons and these are a few of the certified recovery searchers in the country, among them is Kelly Osborn.

When called, she braves the elements to bring those lost and missing home to their families; law enforcement often calls in those trained and with experience to do the job properly. Because every search is a potential crime scene, what is found is tagged and documented as evidence. During this particular search it had to be difficult to return to a community where law enforcement has refused to investigate an unsolved case. You would not know that Kelly herself is searching for answers that are fairly simply as it relates to her own daughters case. She is searching for justice.

On January 1, 2009, Sheena Morris was found dead in a hotel, hanging from the shower. Her then boyfriend was not arrested at the time, and would not be questioned by Bradeton, Florida officers for some 22 days later.
Sheena Morris placed a call to 911 hours before her death reporting domestic violence by her dangerous boyfriend. She even took pictures of her injuries, a cut on her neck, on her ring finger.

The people in the next room of the hotel also called 911 before her murder to report the disturbance and sound of violence coming from the room next door.

Shortly before her death, the keys to her apartment were taken and she was physically attacked. The keys are an important part of this case because Sheena Morris had criminal information that would implicate the last person to see her alive. It doesn't help that the dangerous and criminal boyfriend also has direct ties to the Genovese family and he can be placed at her apartment carrying out boxes with the stolen keys taken from Sheena just before he staged her death to make it look like a suicide. In March, her death certificate was changed from suicide to undetermined.

There were mistakes made at the crime scene of Sheena Morris, but egos of the Bradenton Police Department are stopping a mother from having the investigation opened. The bottom line is, all that is required is for another county to come and re-investigate the case. In this resort play land of a community, you have a killer on the loose.

Expert forensic reports state that the crime scene was staged, and this points directly to an intimate partner homicide. The evil and criminal boyfriend roams the streets free. Maybe residents and potential home buyers in Bradenton Beach will unknowingly hire the killer, also a Genovese family member, to lay new carpet or tile in their home. Does he bring that much revenue to the tax rolls in the community to warrant looking the other way? I think not!

Obviously, those in the Bradenton Beach police department are not getting the message that this is not going away unless it is given to the investigators in Manatee County (the Sheriff Brad Steube is also up for re-election.)

Then we have the officials at the Florida Department of Law Enforcement and Commissioner Gerald M. Baily who have the ability to implement a "changing of the guard," if you will, because the Bradenton Police Chief position is appointed, not elected.

This mother has given so much to families of the missing across the country, most recently in the State of Florida, and this is how those in the local law enforcement treat an unsolved homicide victim's familiy? It raises the question, what else are they not doing as it pertains to crime and safety in their own backyard?

For more information: www.justice4sheena.com
Susan Murphy Milano is with the Institute for Relational Harm Reduction and Public Pathology Education. She is an expert on intimate partner violence and homicide crimes. For more information visit http://www.saferelationshipsmagazine.com/ She is also in partnership with Pamela Chapman and iAscend Programs. http://pamelachapmanl.biz

Susan is the author of "Time's Up A Guide on How to Leave and Survive Abusive and Stalking Relationships," available for purchase at the Institute, Amazon.com and wherever books are sold. Susan is the host of The Susan Murphy Milano Show, "Time's Up!" on Here Women Talk http://www.herewomentalk.com/and is a regular contributor to the nationally syndicated The Roth Show with Dr Laurie Roth. Susan is a survivor- the daughter of a police officer family intimate partner homicide by her father who murdered her mother before committing suicide.
at 01:52

Sheena was murdered. What would you do if it happened to your daughter? Kelly is giving back to people in Sheena's memory. God bless her.