Jamie Fields-Arrington: No Match for Evil

It was Saturday when Jamie Fields headed into town to run errands and have her hair done.  Her husband with whom she was ending her marriage had been threatening and stalking her. 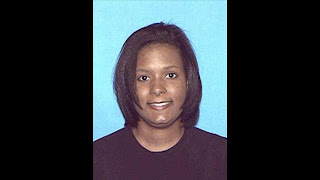 Jamie Fields-Arrington, 33 was a parole and probation officer with the State of Missouri and likely believed her husband was dangerous but not to the point where he'd kill her.  Outside a St. Louis County beauty salon the couple argued.  Marion Lamont Arrington, shot Jamie three times before fleeing the scene.  Jamie was pronounced dead at the hospital.

Earlier today, the coward turn himself into police. Yes, anyone who murder's their wife should be caged up like an animal for the rest of their life.  The actions of those who murder a loved one is no different than a dangerous savage beast. Why he's only been charged with second-degree murder is disturbing.  The prosecutor  can easily add stalking, perhaps upgrade charges to first degree murder (because he had intent to kill) and fleeing the scene of a crime.

The dangers to anyone ending a relationship should be carefully considered when ending a dating relationship or marriage.  The reaction to rejection across the county is costing lives.  In cases where the victim has died her fears during the relationship or marriage remain silent, telling family or friends is considered "hearsay" and it's not enough when the person responsible is finally brought to trial.  As a precaution, victims are encouraged to prepare the evidentiary abuse affidavit and video, also known as the "EAA."  This removes hearsay and in a victims own words provides historical abuse documentation, gives law enforecment and prosecutors a profile on the offender and shows his pattern of conduct prior to the crime should the victim vanish or be killed.

Document the Abuse.Com contains vital information on how the EAA can support each case of abuse from the perspective of the first responders and advocates, to an appearance in court.  It explains the legal benefits to the abuse victim, whether they are able to testify or not, how their words are forever documented and hold up in court, much like a Living Will.

www.documenttheabuse.com
Susan Murphy Milano is a staff member of the Institute for Relational Harm Reduction and Public Pathology Education as a educator and specialist with intimate partner violence prevention strategies directing prevention for high risk situations and cases.

A national trainer to law enforcement, training officers, prosecutors, judges, legislators, social service providers, healthcare professionals, victim advocates and the faith based community and author.. In partnership with Management Resources Ltd. of New York addressing prevention and solutions within the community to the workplace. Host of The Susan Murphy Milano Show,"Time'sUp!" . She is a regular contributor to the nationally syndicated "The Roth Show" with Dr Laurie Roth and a co-host onCrime Wire. Online contributions: Forbes : Crime, She Writes providing commentary about the hottest topics on crime, justice, and law from a woman’s perspective, as well as Time's Up! a blog which searches for solutions (SOS) for victims of crime
at 01:23