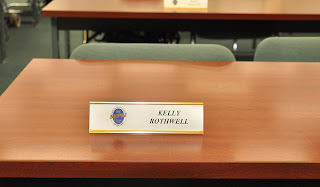 
On Wednesday, April 13th, missing Florida Police Cadet Kelly Roth will not be graduating with her class. The St. Pete Police Academy is scheduled to graduate its spring class of recruits. Kelly Rothwell's name is listed among the students, with the notation: "Not in attendance." There will be a candlelight vigil and prayer circle to honor Kelly Rothwell following the 6 p.m. graduation ceremony.

A month has passed since Kelly confronted David Perry. She didn't take anyone with her when she told the former New York Corrections Officer, it was over, she was ending their relationship. Maybe if she did, the outcome would be different. Violent offenders, in some situations, will back down and do nothing when someone else is watching. Had Kelly Rothwell brought a few friends to the condo that evening, the cowardly Perry would have tucked his tail between his legs and waited for another opportunity to catch her alone.

On March 12, 2011, David Perry, in my opinion, robbed Kelly of her life long dream of becoming a police officer. David Perry is a cowardly killer, controlling her down to the last breathe of life, to where he has her hidden.

David Perry is similar to a magician, his stage, behind closed doors. There are far too many imitators to list but, no different then Perry, they each follow the same pattern. It varies from case to case, but, in the end, the magic act is identical; the women always vanish, and usually without a trace. I am hoping that with the recent involvement of the CUE Center for Missing Persons, she can be brought home her to her family, and magic man, David Perry, is charged and arrested for her murder.

When Martin Luther King spoke or wrote about violence, he did not intend to apply his words of wisdom to victims who have lost their lives to controlling, angry abusers hell bent on their own justice. The abuser who preys and kills their loved ones is summarized below in words written over 45 years ago.

"The ultimate weakness of violence is that it is a descending spiral, begetting the very thing it seeks to destroy. Instead of diminishing evil, it multiplies it. Through violence you may murder the liar, but you cannot murder the lie, nor establish the truth. Through violence you may murder the hater, but you do not murder hate. In fact, violence merely increases hate. So it goes. ... Returning hate for hate multiplies hate, adding deeper darkness to a night already devoid of stars. Darkness cannot drive out darkness: only light can do that. Hate cannot drive out hate: only love can do that."

If you or a loved one are preparing to leave an abusive relationship or are being stalked, please consider the importance of creating the “Evidentiary Abuse Affidavit" and video located in the book, "Time's Up." It is a sworn statement detailing the facts of an individual’s victimization, preserving the specifics so they are not lost, even if the victim is. It's difficult to think about speaking from the grave, but no different than any life insurance policy or living will obtained in consideration for those left behind in cases of domestic violence and stalking related crimes.


Susan Murphy Milano is with the Institute for Relational Harm Reduction and Public Pathology Education. She is an expert on intimate partner violence and homicide crimes. For more information visit http://www.saferelationshipsmagazine.com/ She is also in partnership with Pamela Chapman and iAscend Programs. http://pamelachapmanl.biz

Susan is the author of "Time's Up A Guide on How to Leave and Survive Abusive and Stalking Relationships," available for purchase at the Institute, Amazon.com and wherever books are sold. Susan is the host of The Susan Murphy Milano Show, "Time's Up!" on Here Women Talkhttp://www.herewomentalk.com/ and is a regular contributor to the nationally syndicated The Roth Show with Dr Laurie Roth. Susan is a survivor- the daughter of a police officer family intimate partner homicide by her father who murdered her mother before committing suicide.

i was married to this evil man david perry. being with him was a living nightmare. there were days it got so bad i even bagged him to kill me. If you only new the ---- he put our family through. I would never suggest anyone to be in a relationship with someone like him and to leave him take someone with you. LP

So glad you are rid of him and hopefully are happier now. I remember the obsessive vacuuming. We haven't seen each other in about 20 years, but I truly hope your doing well. MC

Luanna was a coke using whore who was sexually abused by her father. she was thief and would expose her tits to everyone who was around. she was a terrible mother who abandoned her children. she was the worst liar i have ever met. davids mother also hated wannie. she has always seeked out attention. she is a terrible person who deserved everything you got.