The headline in the Washington Post, " HEARTHBREAKING FINISH FOR U-VA ROMANCE," continues, in my opinion, an ignorant yet sweeping trend in reporting these tragic crimes. Instead of sugar coating a headline that brings readers to the Internet or sell newspapers why not call it out for what this horriffic tragedy is, "Intimate Violence Murder Takes The Life of College Student," or do a follow-up as True Crime Writer Kathryn Casey wrote titled "Okay Girls-Time-To-Listen Up."

I realize that does not send loyal readers running to the headline in fact it is likely to make intelligent subscribers ignore the story and head over to the lesuire section of the newspaper. And it also does not do much for parents sending their children off to college at a large university. Anyway you look at it it is about the all mighty dollar.

Lets face it Domestic ,Violence and Stalking related deaths do not sell newspapers. The subject matter is not attractive and it only perpetuates the myth that intimate violence is between two people and they should somehow work it work between themselves. I have a news flash for you; it obviously did not work for Yeardly Love, who, in my expert opinion, did not have to die. Nor does the fact that colleges polices and the hour of student orientation they receive upon entering college on sexual assualt and campus crimes do little more than protect a university from lawsuits because they have passed out to the new students written mumbo jumbo from

information copied off a Department of Justice website or newsletter and called it "information you can use to be safe." Obviously, it did not work for Yeardly Love or those we do not even hear about who are silenced on college campuses across the county.

It is a silent yet known fact that University police are not trained adequetly in sexual assualt and domestic violence crimes. And, yes, folks, they are crimes!

An example of a 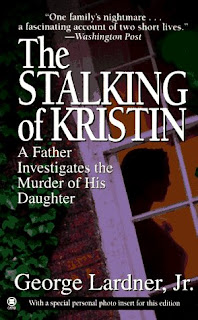 nother tragic case is a book written way back in 1995 by Washington Post pultizer prize winning journalist George Lardner titledm "The Stalking of Kristin," about a promising young art student who was killed by a jealous ex-boyfriend while attending college. Kristin Lardner did everything right. She was educated and sophisticated, and had the time and resources to make the law work for her. And she was a member of the class of people who believe the law when it promises to protect them. With a parent's rage, and an impressive command of the facts and statistics, George Lardner refutes the widespread belief that the courts offer effective protection to battered women who do report their abusers and press charges. The book includes photos of Kristin's artwork about abuse of women and 80 pages of footnotes and bibliography about the legal system. Unfortunately, this book needs to be part of every college campus and law school is no longer in print. I thought about George Lardner, whom I met while on book tour of my first published work, "Defending Our Lives, Getting Away from Domestic Violence and Staying Safe." [published by Doubleday Books]

I am sure, if asked of the father of Kristin , George Lardner, "what has changed in the legal system since the murder of his daughter 18 years ago?": his response would likely be "nothing has changed."

Maybe the Washington Post will do a story or review on the book "Time's Up A Guide on How to LLeave and Survive Abusive and Stalking Relationships." It may not grab new subscribers to the Washington Post, but it will save lives!
at 00:01

I am so glad Susan - you write about these things and yes they do sugar coat crimes - I am so tired of this - Same with custody battles - The dad really loved his kids or he was a good dad despite his anger and rage and the irrational taking of lives of innocents.

They totally miss the point when they make it about "romance" when it is really about control.