Sending an S.O.S. Via Twitter to The White House 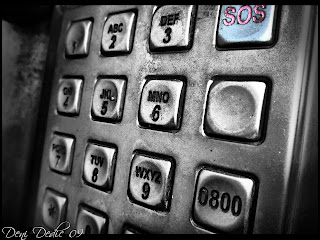 The story below is about a woman whose life is literally hanging by a thread. This war is not on foreign soil in some third world country. It is on American Soil, in an American home. This is another tragedy waiting to make yet another news item in a mid-size newspaper or topix Internet site with neighbors who once knew the lovely couple and their children, and a by-line that is sure to read "they were a lovely quiet couple," as they are being carried out in body bags on stretchers, one by one.

I believe there is a way to prevent these tragedies, but it will take a higher power of intervention. So as my cell phone was transmitting tweet message's I thought what the heck, maybe there is away to tweet a staff person at the white house. Or perhaps in writing this post, since I don't have direct access someone reading this, could pass on a message to David Axelrod or Valerie Jarrett on my behalf to President Obama. Afterall, he did take the time to sign a note for a child who missed school. And he and others on his staff are from my hometown, Chicago.

I must keep in mind Twitters brief code like transmission capacity.

"Woman develops F.E.A.R. technology" is what I would say in my tweet, hoping to get a reponse that would result in saving lives across the county. If I were ever to speak with someone of such importance I would begin the brief conversation with the murder of my own mother and how 20 years later, I have created something that will keep women and their children from being murdered in their own homes. All I need is a 14 minute meeting by telephone. I can be reached at www.twitter.com/murphymilano

This is the life of a typical victim of domestic violence:

In 2005, police arrested my husband for beating me. The judge did not send him to jail, instead he was ordered to pay $825 in fines, weekly counseling sessions for 90 days and 50 hours of community service.

A year later like magic my husband knew someone and his violent criminal record was wiped clean. I was warned if I ever call the cops again I can forget about seeing my kids alive.

In March of this year my husband kicked me so hard with his steel toed boots he broke my ribs
at the hospital in fear for my kids lives I lied saying I fell. I was beaten again the following week
and gathered the courage knowing his threats to my kids and called the police and he was arrested. I received a Restraining order and the judge had a GPS monitoring device placed on my husbands ankle through the duration of my court order.

As you can guess it only angered him. He hired some thug to teach me a lesson, paying the person to set me and my home on fire. Detectives cannot prove it was him, they have no evidence and no one is willing to come forward with the truth. While I was in the hospital my husband served me with divorce papers. . The divorce is final, but he keeps filing motions about things he "forgot" in the divorce.

The police have also dropped the most recent beating charges because someone lost the photos, my evidence that is required to proceed with my criminal case in court. Guess what else? He has family and friends who are police officers and the GPS device has also been removed.

Now he's calling my kids (I sent them to different relatives in a different state to be safe) saying he's not mad at them, he just wants to ask questions about me. He's called my mom, and he has called me. He says he killed our family pets, he's going to find and kill my kids and then think about killing me. He says he'd rather keep me alive, knowing it would hurt me more to live knowing he killed my kids.

Will I ever feel safe? Will I ever stop dreading each phone call, each court date? How can I keep myself and my kids safe if the cops won't charge him, or do anything? And the local DV shelter refused to let me stay when I got out of the hospital after being burned - I required too much home medical care and they were not staffed to take care of people who can't take care of themselves. I'm moving out of state, but I wonder what will be enough? He knows my name, social security number, kids, family, everything. I'm afraid it will not be over until he decides he's done with me.
at 02:36

As a domestic violence advocate who works online with hundreds of victims around the world, this story is not unusual. My own ex threatened me as well, and still searches for me, years later. Not until this is addressed in a BIG way will we see things begin to change. Until we do, safety is just an illusion.

Dear God, Please keep this person and her children safe and free from threaten and actual harm.

This is a powerful post. I have tears as I pray for this person's nad her children's safety.

Please remove my image in the next 24 hours or pay me for the use of it.