American War Hero Was A Victim of Spousal Homicide 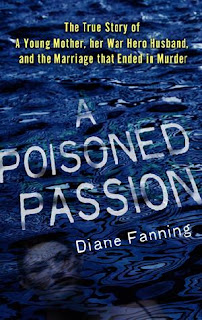 He was an American hero. By the age of twenty-four, Air Force Staff Sergeant Mike Severance had already survived a series of missions in Afghanistan and Iraq. But his life back at home, in Texas, would prove a lot more dangerous. We often only think of women as victims of abuse and murder, but, there are also men and children killed at the hands of their wives and girlfriends.

In Author Diane Fannings next book Poisoned Passion she intelligently brings the reader into the mind of Wendi Mae Davidson, a cold blooded killer.

In the winter of 2005, Mike’s wife, a veterinarian named Wendi Mae Davidson, reported him missing. Wendi told police that Mike had been acting erratically—visiting local clubs, staying out late, sometimes not coming home at all. She filed for divorce the very next day.

Eventually Mike’s body turned up in a stock pond on a private ranch. Investigators described a corpse that was weighted down with two cinder blocks, a rock, a boat anchor, and other equipment. It had also been stabbed forty-one times with a knife. But an autopsy report told a different story: That the cause of death was exposure to pentobarbital and phenobarbital, drugs commonly used in veterinary medicine. All the evidence pointed to Wendi…and soon she would be found guilty of murder in the first degree. There is also a video I have included from YouTube.

In my twenty plus years working with crimes of passion I am always interested in the mind of the person behind the crime. For me, it is a learning tool to save lives. Very few writers have the insight and gift to take a true story and make it one hell of a page turner. In my opinion, Diane Fanning does just that in "Poisoned Passion."
at 03:19